So, what was the trilobite and what about it inspires such fondness among students of all ages? Could it be its unusual body armor that allowed for unique defense mechanisms?
Perhaps it’s the almost friendly appearance, with its prominent "face." Or is it simply because of its broad diversity among the remnants of a long extinct species?
A close look at this ancient creature reveals a certain familiarity, sharing characteristics with modern-day species known to us all.

I’ve already mentioned that the trilobite was one of the first arthropods.
Arthropods still exist today, of course; they are those creepy, crawly bugs that invite themselves to our picnics (ants, spiders, mosquitoes, and the like) or the crusty seafood delicacy that occasionally graces our tables.
(Take your pick, shrimp, lobster or crayfish: all arthropods!) The trilobite earned its place among the arthropods because it had a hard exoskeleton, a body that had at least a couple of sections, and jointed legs.

It’s pretty easy to observe the hard exoskeleton in a trilobite fossil. It’s the part that turned to stone!
That process is another whole story, but the important part is that in the trilobites, the exoskeleton was so distinctive that paleontologists use the characteristics to help place the trilobites into different groups for classification.

The trilobite has three easily identifiable sections: the head or cephalon, the thorax, and the pygidium or posterior section.
One might suspect the trilobite to be named for these three sections, but it was not. Its name, "trilobite" means three-lobed, referring to the three lobes that run head to tail: an axial lobe through the center and two pleural lobes on either side, left and right.
This 3-lobed characteristic is common to all species of trilobite, even though the appearance of the three body sections can vary greatly.

Trilobites declined in numbers during the second half of the Paleozoic. The Permian Period was the last period of the Paleozoic Era. It ended in an event called the Permian Mass Extinction.
Many animals including the trilobites disappeared at this time. 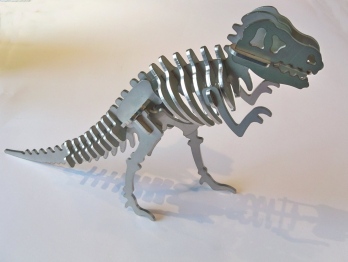 Powered by BestWebLayout and WordPress